Skip to the content
Have faith, love and courage to learn and share with others.That is what we at uftHelp believe in.

We are starting this series of tutorials with focus on JAVA programming language.Do follow us on Fb,G+,Twitter for more updates.

History:-
It kick-started in 1991, when a group of Sun Microsystem engineers team (called as Green Team, led by James Gosling) put up their efforts to create a language for digital devices such as set-top boxes, televisions etc.Initially it was as named “Oak”(The name Oak was used by Gosling after an oak tree that stood outside his office.) but as this was the trade mark of Oak Technologies, new name JAVA came into existence.

The first publicly available version of Java (Java 1.0) was released on 27 May,1995.After that it became the most popular programming languages,and knowingly or unknowingly it is integral part of our daily lives —from mobile phones to handheld devices, games and navigation systems to e-business solutions, Java is everywhere—

Sun Microsystems was later acquired by the Oracle Corporation in 2010.

We can check and download the latest version of Java.

platform independent: Java programs use the Java virtual machine(JVM) to run the java program on the operating system directly. This makes Java programs highly portable.Thus making the code run on  Windows or Linux.

interpreted and compiled language: Java source code is transferred into the bytecode format which does not depend on the target platform. Further JVM interprets these bytecode instructions and translates them into native code
instructions which can be understood by operating system.

Strongly-typed programming language: Contrary to  VbScript which is loosely typed, Java is strongly-typed,i.e. we need to declare the variable before using it and conversion to other objects is relatively strict,like it must be done in most cases by the programmer.

automatic memory management: Java manages the memory allocation and de-allocation for creating new objects. The program does not have direct access to the memory. This feature of garbage collector automatically deletes objects to which no active pointer exists.

Write Once Run Anywhere!!
Java is known as platform independent why? Because It has the ability to run the same program on many different hardware configurations and operating systems.

This is possible because of JVM.It  makes Java as a portable and platform independent language. 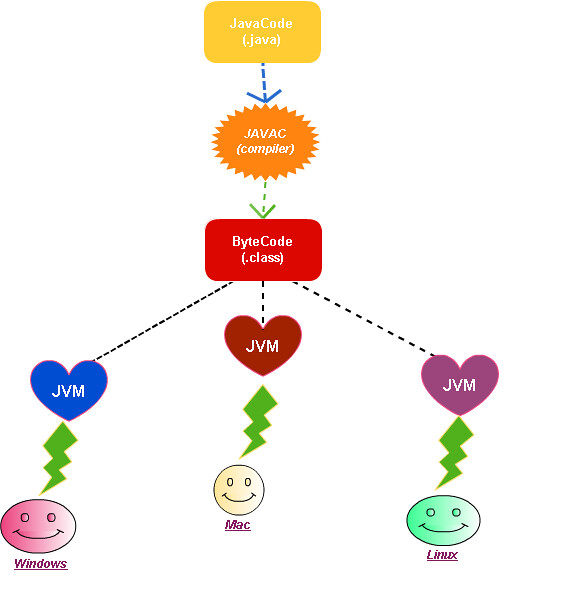 When the Java code is compiled, an intermediate code state is created called as the bytecode.This bytecode is then converted to Machine code (Native code) by JVM.

The JVM varies across platforms,But the bytecode generated by the compiler is same everytime.The JVM performs the function of handling the bytecode and producing executable code in the form as is understood by the platform on
which we are working on.This is the reason that java is called as “Write Once Run Anywhere”.

One reply on “Introduction to JAVA”