When we first start with selenium automation our very first line of code comes as :-
WebDriver driver = new FireFoxDriver; 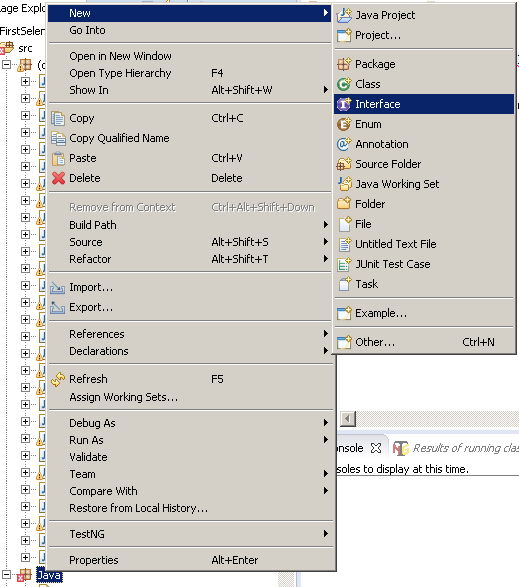 47 replies on “Understanding Interface concept of Java in Selenium”

Really a good one …informative..Get to know the reason of driver object instance

Very nice explanation, its so simple to understand. Thanks for the author.

Thanks alot…its enough for beginner..!!!

Why do you think, developer has made the WebDriver an Interface instead of Abstract Class?

wow! what a explanation! awesome it is…. thank you so much

Thank you very much! You explain the concept very well. Keep it up. Thanks for the post.

it was very helpful. Thankyou so much. keep it up with the great work.

you can pass it as parameter in the methods you want to use it.

Because the methods implementation declared inside WebDriver interface differs as per requirement.
As mentioned above.
webdriver driver; driver = new firefoxdriver or driver = new chromedriver();

hello,
the best explanation i ever came across…thank you very much.

thank you, was very useful.

The most awesome article explaining Interface in the most simplest language.
Thanks a lot.

Thanks alot. It was very lucidly explained.

if it is the case, without "implements" keyword how webDriver can be implemented?

Your explanation is awesome.

i Read/see many blogs youtube vedio to understand why and where we use interface..the examples given here really a eye opener for me.thank you so much to describe such a big thing in a simpler way

why we need to assign object to the reference variable of interface type… what problem occurs if we create as FirefoxDriver driver=new FirefixDriver();

simple in words but most informative article i have come across,looking forward for more such explanations

Thank you such a simple and clear explaination

It will work no doubt.But to define a generic structure for all driver instance the WebDriver is declared as an Interface so that we can use the same Interface object for chrome,firefox,ie,safari..or any web browser come in future.

it was very very helpful. Thank you. keep it up with the good work.

because if you use WebDriver driver = new FireFoxDriver(), then you can use same "driver" object for initialising Chrome driver or IE driver (i.e. driver = new ChromeDriver()), otherwise you need to keep on creating driver objects for each browser

Because WebDriver interface is just a blue print it just tells you what method your derive class should contain, Now If you make it abstract class then you need to define complete body of method which has no meaning as it will never going to be in use it will always be overridden by derive class methods.

Thank you for your time and explanation

Nicely explained. Thanks a lot!

Very Good explanation which is understandable for all.